We’re delighted to team up with Modern Poetry in Translation for the third time, and once more offer you the chance to be published in this world-leading journal, and take part in a workshop with its editor. This time, we’re asking you to (co-)translate a poem by Irma Pineda, writing in the endangered language of Isthmus Zapotec, with the help of translator Wendy Call and MPT editor Clare Pollard, who introduces the challenge…

This summer’s issue of Modern Poetry in Translation – If No One Names Us: Focus on Mexico – led me, as editor, to read poems translated from a number of Mexico’s 68 national languages. 63 of those languages are indigenous, and many are critically endangered due to both a history of colonialism, and those who would still extract resources from indigenous ancestral lands. Poetry is one of the ways by which such languages can be preserved, its writing often a work of activism as well as care.

Wendy Call’s wonderful translations of Zoque poet Mikeas Sánchez appear in our issue, along with her co-translations of Juana Karen Peñate, who writes poems in the Tumbalá variant of Ch’ol, a Mayan language spoken in Chiapas. We were also interested in her work with Irma Pineda, who writes in Isthmus Zapotec, and are thrilled that she has made a bridge translation of one of Pineda’s poems for this challenge. 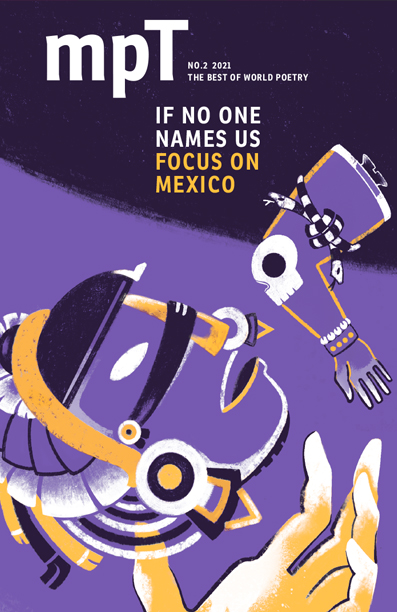 As many indigenous Mexican writers are also fluent in Spanish, it is often the first language they are translated or self-translated into, and the Spanish translations can act as a ‘bridge’ – allowing for new versions of poems in multiple languages that often wouldn’t otherwise exist (fluent translators of many indigenous languages being few in number). You can see here Irma Pineda’s Spanish version and also Wendy Call’s ‘bridge’ into English. By letting the poem cross these generous, connective translations, you can perhaps make a third – your own.

This is a chance to really engage with an endangered literature; listen to its sounds; pay attention to the different ways in which it encourages us to think.

We would like you to read through the all the versions of the poem and ask yourself:

Your final co-translated text might be as close to Irma Pineda’s as possible or only in conversation with it, but however you approach the material I hope that spending time this closely with someone else’s words will expand your own poetic practise.

Submit your poetic translation by Sunday 15 August 2021. We will publish the best entry in Modern Poetry in Translation, where we are always keen to support emerging translators. We also hope you will join our community and learn more – do follow us on Twitter @MPTmagazine or think about subscribing.

I am also facilitating a free online poetry translation workshop on Monday 19 July 2021 (7-8.30pm BST) over Zoom. We will be doing some translation warm-ups and creating a group translation of a different poem. You don’t need to know any other languages to take part, and you don’t need to ever have translated a poem before – you just have to be aged 14-25 and interested in learning more. All the spots have now been taken. Please check back next year for more opportunities – and we look forward to reading your entry to the challenge!

Listen to Irma Pineda reading the poem in Isthmus Zapotec below.

On the Path VII

The houses of your village have eyes
that look for sand grains on the beach
they see the sun from far off
that doesn’t shine on their heads today
doesn’t illuminate their roof tile-hair
painted with black, red and soft colours
Who lives underneath the pink or yellow roofs?
Who is in the dark houses?

Where did its blood go?
Was it the unbearable silence
that scared away the dogs?
There are no children in the street,
not even robbers leaping on the roofs
The birds have also gone away…

Notes from the translator, Wendy Call:

Irma Pineda is an Indigenous Binnizá (Isthmus Zapotec) poet from the city of Juchitán in Oaxaca, Mexico. She has published ten books of bilingual (Spanish-Isthmus Zapotec) poetry. Since she was a little girl, Pineda has been immersed in the work of language, or guunda—an Isthmus Zapotec word that means to sing, to read, or to study.

She writes in Isthmus Zapotec, which is part of the group of languages all called Zapotec. Nearly half a million people in the state of Oaxaca—and many thousands who have immigrated to Mexico City, Los Angeles, and elsewhere—are Zapotec speakers. ‘Isthmus Zapotec’ includes languages that are as different as Catalán and Spanish. What we call ‘Zapotec’ contains more than sixty distinct language variants—as wide-ranging as the entire family of Romance languages.

Zapotec was the first language in the Americas to have a written form. Around 600 BCE, long before the Maya developed a writing system, the Zapotecs began using glyphs to record their history and stories. This glyph recording system persisted for fourteen hundred years. Nobody knows why the Zapotecs stopped using their written system, and after that, Zapotec literature continued as an entirely oral tradition. In the 1890s, Isthmus Zapotecs began to use the Latinate alphabet—the same one we use in English—to write down their poems, stories, histories, songs, and jokes.

Still, most of the people who speak Isthmus Zapotec today aren’t formally taught to read or write it. The language survives in their ears, mouths, minds, and hearts. Like most Zapotec speakers, Irma Pineda was educated entirely in Spanish. When she began to write poetry as a teenager, she composed the poems in her head. Then, she borrowed Zapotec books of literature and history from her neighbours and looked up the words in her poems one by one, to learn how to spell them. She remembers, ‘I wasn’t taught to read Zapotec, so I didn’t know how to represent the sounds. I didn’t have a dictionary. I didn’t even have a grammar book.’ 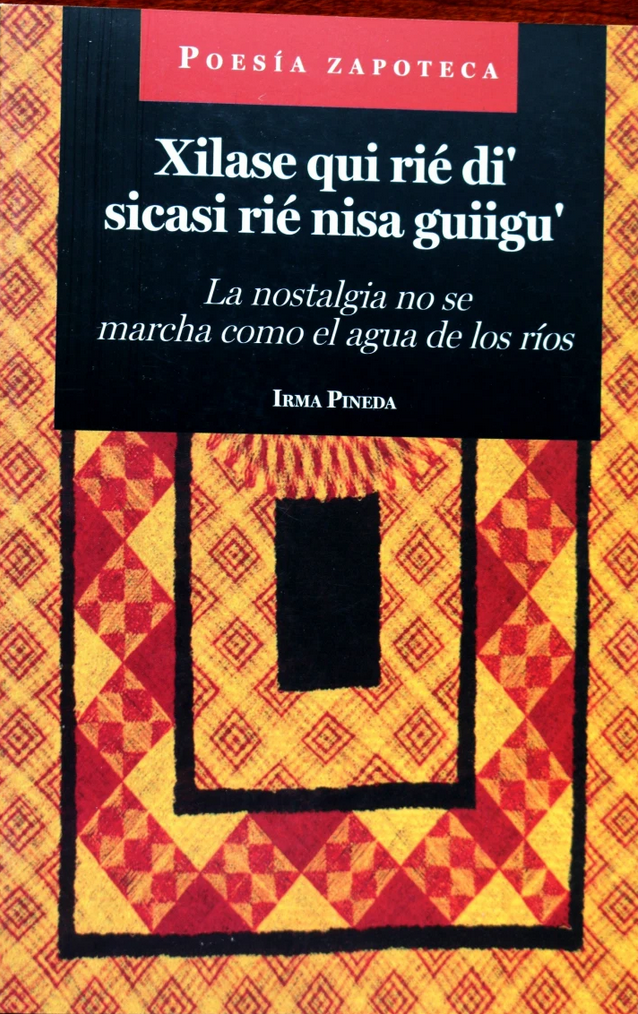 This poem originally appeared in Irma Pineda’s third collection of poetry, Xilase qui rié di’ sicasi rié nisa guiigu’ (La nostalgia no se marcha como el agua de los ríos), published by Escritores de Lenguas Indígenas, 2007. This poem is the seventh in a twelve-poem sequence titled ‘Lu Neza / Sobre el Camino’ (‘On the Path’). All of the poems in this book are persona poems: poems told in the voice of a speaker who is not the author. In the case of this book, there are two (fictional) speakers: a person who has left their home village in southern Mexico to travel to the United States to work, and that person’s spouse, who waits at home. This poem is in the voice of the person waiting at home.

This poem is also included in her anthology for children: Chupa laxidua’ / Dos es mi corazon (My Heart in Two): Irma Pineda para ninos. All the illustrations in the book are by children from Juchitan. The link is to the full book, published on the web, so you can see the children’s artwork. This poem (‘On the Path VII’) is included in this anthology, on pages 40 and 41. 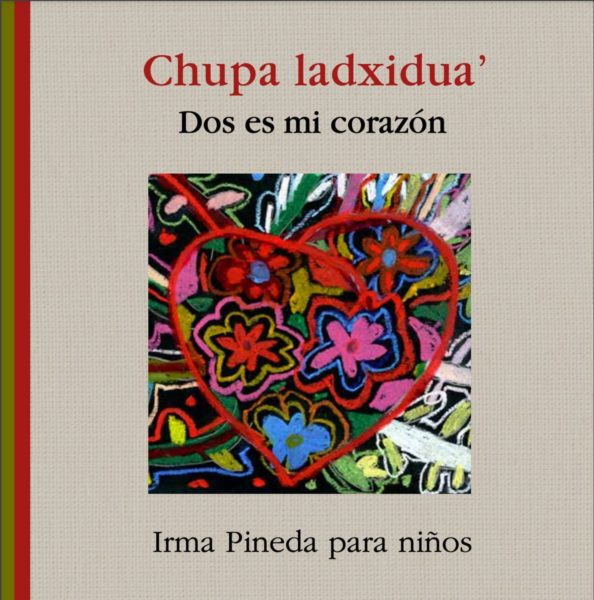 I have been translating Irma Pineda’s poetry into English for more than a decade. She and I have worked out a three-stage translation process. First, I create a draft translation in English, based on the Spanish version of each poem. I also study the patterns in the Zapotec version, though I don’t speak Zapotec. I look up key words from the poem an Isthmus Zapotec-Spanish dictionary. Then, I discuss that draft with Pineda; we often spend an hour discussing a single poem. She answers my questions; gives me a deeper sense of the poem’s inspiration, meaning, and context; and explains the differences between the Zapotec and Spanish versions of the poem—she calls them ‘mirror-poems.’

What do you see in the mirror of this poem?

An article about Irma Pineda performing her poems

Irma Pineda, author, translator, and professor from Juchitán, Oaxaca, has published seven books of bilingual Isthmus Zapotec-Spanish poetry. She is a member of the UN Permanent Forum on Indigenous Issues.

Wendy Call is an author, editor, translator, and educator in Seattle (Duwamish land). Her poetry translations have been supported by the National Endowment for the Arts and the Fulbright Commission.

Selected poets will be published on Young Poets Network and sent an exclusive Young Poets Network notebook as well as poetry goodies. The first-prize poem in this challenge will also be published in Modern Poetry in Translation, an international poetry magazine founded by Ted Hughes and Daniel Weissbort that publishes the best of world poetry in English translation. You could appear in print alongside some of the leading poets and translators of the global poetry scene!

This challenge is for writers aged up to 25 based anywhere in the world. The deadline is midnight, Sunday 15 August 2021. You can send a poem written down, or a recording as a video or as an audio file; however, do bear in mind that the first-prize winner will have the text of their poem published in Modern Poetry in Translation. You can send as many poems as you like. Submissions must be in English, although you may include snippets in other languages.

Send your poem(s) to [email protected] with your name, date of birth/age, gender, and the county (or, if you’re not from the UK, the country) you live in and the subject line ‘Translation challenge 2021’. If you are aged 12 or younger on Sunday 15 August 2021, you will need to ask a parent/guardian to complete this permission form; otherwise, unfortunately we cannot consider your entry due to data protection laws.

By entering, you give permission for Young Poets Network, The Poetry Society and Modern Poetry in Translation to reproduce your poem in print and online in perpetuity, though copyright remains with you. Please do be sure to check through the general Terms and Conditions for YPN challenges as well.

Irma Pineda, author, translator, and professor from Juchitán, Oaxaca, has published seven books of bilingual Isthmus Zapotec-Spanish poetry. She is a member of the UN Permanent Forum on Indigenous Issues.

Wendy Call is an author, editor, translator, and educator in Seattle (Duwamish land). Her poetry translations have been supported by the National Endowment for the Arts and the Fulbright Commission.

Clare Pollard is the editor of Modern Poetry in Translation and a judge of Foyle Young Poets of the Year Award 2021. She has published five collections of poetry with Bloodaxe, the latest of which is Incarnation (2017). Her translation projects have included a new version of Ovid’s Heroines (2013), which she toured as a one-woman show with Jaybird Live Literature, and a co-translation of Asha Lul Mohamud Yusuf’s The Sea-Migrations (2017) which was The Sunday Times Poetry Book of the Year 2017.

14 thoughts on ““Who is in the dark houses?”: a poetry translation challenge”