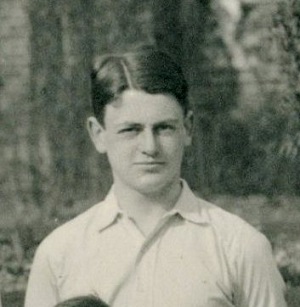 Foyle summer intern Hannah Locke sets our final August challenge – a month of vivid and varied reading and writing tasks from Foyle Young Poets to get you inspired! This challenge encourages you to write a poem for the Timothy Corsellis Prize, the new annual poetry award on Young Poets Network, by looking at the theme of transition or change.

Timothy Corsellis was a WWII soldier and poet who sadly lost his life at a very young age. Growing up in Winchester and inspired by John Keats, he always wanted to be a poet: “There is one thing I want to be and one thing I once thought I might be and that is a poet.” Corsellis had a changing relationship with the war effort, transitioning between civilian and soldier, and this is captured in his poetry.

After leaving school, Corsellis worked in the Town Hall in Wandsworth, whilst living in and helping out with a Winchester settlement house (a club to help disadvantaged boys and young men) in the Hoxton area of the East End. He registered as a Conscientious Objector and first wrote about the war not as a solider but as a civilian:

from ‘News Reel of Embarkation’

In May 1940, with the defeat of Dunkirk and the fall of France, Corsellis applied to be removed from the list of Conscientious Objectors and by July he had been accepted by the RAF. He wrote many poems during the six month training period, and these are among his best-known. They explore his shifting sense of the pettiness of service training and the thrill of flying.

However, Corsellis learnt that he was to be put under Bomber Command, which would involve the bombing of civilians. Horrified, he asked his Commanding Officer to be transferred to a fighter squadron. In February 1941, he received an honourable discharge and so returned once more to civilian life.

As a civilian, he worked as an Air Raids Precaution worker, helping people through the bombing raids of the Blitz, pending his transfer to the Air Transport Auxiliary. He is also known for his poems about the Blitz, which vividly capture the civilian experience of war.

Your challenge is to write a poem that explores the theme of transition: moving from one place to another, one occupation to another, one emotional state to another… Transition is something which particularly characterised Timothy’s sadly short life, and something he explores in his poems. For example, in ‘Dawn After the Raid’ he traces the changes both in the bombed city and in the people affected by the air raid.

Dawn After the Raid

IV
Distorted corpse once breathed slum air
Lived in the grey dust where it died;
Is it for this that bending we strived
And fought in other’s blood and other’s sorrow
To reach these wretched mangled remains?
Is it for this that we ached in the darkness
Not knowing that nearby
Another house had fallen
To the blast of that same bomb.

VI
Sometimes we pray to be hardened and callous
But God turns a deaf ear
And we know hate and sorrow,
Intimately
And we do not mind dying tomorrow.

This poem contains many transitions – from life to death; from ignorance to knowledge; from the familiar, colloquial “number thirty two” to the less personal “a body”; the speaker prays to become “hardened and callous” because it would make it easier to experience and see so much misery, but two lines later he tells how he knows this misery “intimately”. The transitions work on many different levels.

You could write about the transition between being a civilian and a soldier, either as a soldier who has just arrived at training or just returned home from war. How has this change affected your identity? What is it that roots you to yourself? Corsellis chose to continue writing poetry, what is it that you do that reminds you who you are? What are the strangest things you have experienced in the new space you are in? How do you think this transition will affect your future?

This is just one idea – the transition doesn’t have to be a literal, geographical transition, it could be emotional or spiritual also: think about death, resurrection and new hope in war time. Hannah Locke is a young poet reading English Literature and Language at King’s College London. Hannah rans a blog that reviewed and provided information about poetry events in London. Earlier this year she worked with a photographer and fellow poet to produce a short film poem Gordon. She was one of the 2014 Foyle summer interns at the Poetry Society, and is currently reading for her dissertation and final year at university. Hannah was a Foyle Young Poet in 2009.

2 thoughts on “Timothy and transition”