How are poems like memes? Poet Rishi Dastidar thinks about how these strange, self-replicating internet things can be likened to writing, and challenges you to create poems inspired by memes.

Let’s start with a picture that you probably know: 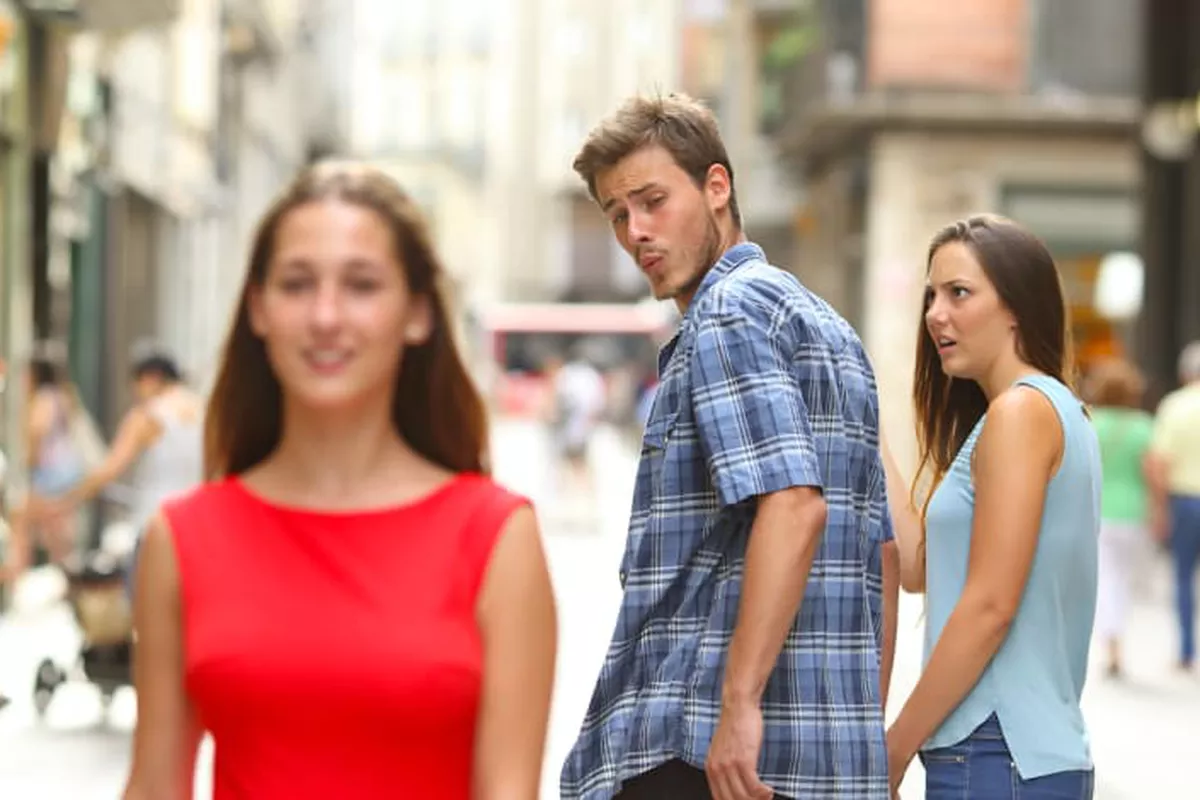 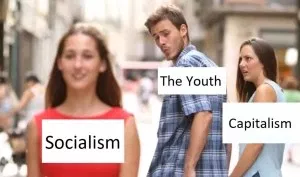 The ‘distracted boyfriend’ image, and its various captions, has been one of those things that you notice occasionally, then see everywhere, suddenly, all at once. You maybe laugh or shake your head at the various different versions that you see; then maybe you think about how this image has spread so far and so fast; what means it can be adapted and reused in so many different ways; and then, most likely you think: maybe I can make one of those myself.

We’re living in a meme world now. And poetry is part of it too.

Before we get on to the ways that poetry and memes are similar, and how they interact, let’s start with some definitions. ‘Internet memes’ (doesn’t that sound so grandad?) are things that spread on, um, the internet, person to person, via social networks, emails, blogs: they can be an activity, a concept, a catchphrase, an image, a video. A commonality is that this sharing is done as mimicry or for ‘humorous purposes’ (hi again grandad). A meme can be as small as a word or a phrase that has been deliberately misspelled (hello lolcats) or features wonky grammar (hello doge), and more often than not draws on existing internet cultures and subcultures. Oh and when a meme catches light on the internet it tends to spread fast.

The definition of internet memes draws on the idea of the ‘meme’ invented by biologist Richard Dawkins in the 1976 book The Selfish Gene. It was his attempt to try and define how ‘cultural information’ spreads in a similar way to how biological information is passed on via genes. A meme, for Dawkins, is a unit that carries cultural ideas, symbols and practices, that can be transmitted from mind to mind via writing, speech, gestures and rituals – some element of mimicking (and so perhaps learning?) needs to be involved. Dawkins suggested that song melodies, and even trends in fashions, were examples of memes. And memes, like genes, can in theory self-replicate, mutate and respond to Darwinian selection.

When asked about internet memes specifically, Dawkins suggested that he would define them as a meme deliberately altered by human creativity, a “hijacking of the original idea”. And of course, internet memes leave a trace that means they can be analysed. (In an example of how culture can become self-referential, this video features Dawkins himself becoming an internet meme.)

Theory aside, what does this mean for our poetic purposes? Well, at one level we can start to see the similarities between the creativity that underlies memes and what we do as poets. My working definition of creativity is: when two or more unrelated things – ideas, concepts, images, phrases – are brought together to make something new. And when you think about it, that’s pretty similar to what we do as poets too: taking an image we observe, a phrase we overhear, develop, create – or maybe even borrow – and put that into pre-existing forms or structures to arrive at somewhere, something new.

There’s a lively debate about the extent to which we’re living in a remix culture, where technology is now allowing new works to be created by editing and copying existing pieces, and memes are an obvious outcrop of this. But again, this is nothing new to poets: we read, we mimic the writers and work we like, we do it again and again, and through that start to find our voice and style.

There’s also something deeper going on about thinking in circles, or if we want to be grander, loops – poems, like memes, are perfectly self-contained units; they are both ‘themselves’, and carry the explanation of themselves within themselves. Now, you might need a bit more information from the outside to unpick any deeper meanings present, but in the main there is enough within both poem and meme that means you can begin to engage with, enjoy them without further input.

Poetry, what social media was waiting for

I’m only slightly joking in that subheading. As it turns out, poetry – in all its guises – has been revved up by social media; and in turn social media absolutely loves poetry – for sure its size helps it be shared, but more than that, the sense of openness, emotionality and wonder that inhabits many poems chimes with what the early, utopian days of what social media could be.

When we focus in on thinking about memes and poetry specifically, people have been quick to make the link. In one sense, instapoetry is as pure as memes and poetry get: bolts of emotion so captivating you have to share them. You don’t need to spend much time on Twitter to find plenty of accounts, some human, some powered by bots, which celebrate memes and poetry. Take for example @Poetmemes, whose bio says, ‘sometimes a poem is a meme, but a meme is always a poem.’

And of course we can’t overlook arguably the most famous poetic meme: 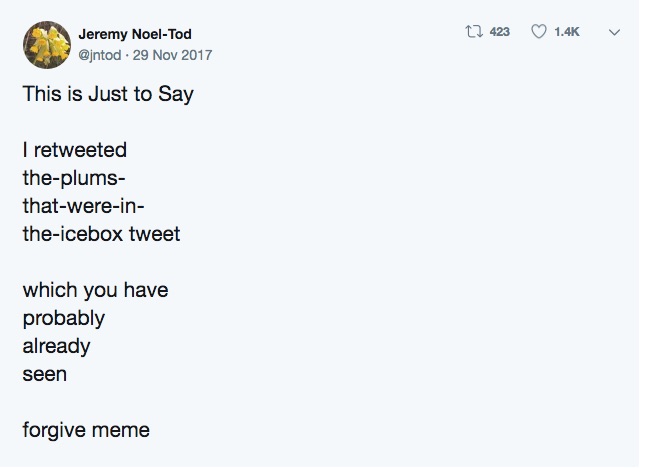 (If you need an, um, refresher, William Carlos Williams’ original poem is here, along with a good explainer of what the heck was going on. There are also bots dedicated to creating, without any human intervention, endless versions of WCW’s poem.)

Now, there’s a lot to potentially think about here, not least why people seized on this particular poem then. But I’d like you to consider three things in particular. One is the way that, even in a small space, thinking about a poem as a meme still means you have to consider the basics of craft: enjambment, pacing through the poem and so on.

Another is the visual – how does the poem/meme look? We don’t often talk about it in these terms, but for me memes that riff off poetry are close in spirit to concrete poetry – that’s to say poetry that is very aware of how it looks and appears in the space it has. It’s a reminder that as much as poetry is an aural and written experience, it’s also a visual one too.

And the third is the role of humour. Clearly it gets our attention, the attempts or otherwise to make jokes out of famous poems. I’m interested more in why this has such traction – to me it suggests that there is a hunger out there to, at times, subvert what is traditionally viewed as poetry’s seriousness. Too often we think that for poetry to be taken seriously we can only consider poetry with serious themes and a serious approach. I would like to suggest that humour – even the attempts to be playful and funny through poems – are as vital a part of our writing armoury too. And if it helps a poem be more memorable so much the better.

Why is that important? Don Paterson has said it best:

… a poem is just a little machine for remembering itself. Whatever other function a rhyme, a metre, an image, a rhetorical trope, a brilliant qualifier or stanza-break might perform, half of it is simply mnemonic. A poem makes a fetish of its memorability. It does this, because the one unique thing about our art is that it can be carried in your head in its original state, intact and perfect. We merely recall a string quartet or a film or a painting, actually, at a neurological level we’re only remembering a memory of it; but our memory of the poem is the poem.

And if a thing is easy to remember, it makes it easier for it to spread far and wide; a pretty good summation of why a meme exists.

We want you to write a poem (or poems) inspired by a meme. You can go a number of ways with this; you could take an existing meme (e.g. from giphy, knowyourmeme, etc.), and use any element of that as the inspiration for your poem. Or you could try and develop a short (less than 280 characters) poem that has the structure and the potential to become a meme itself – which means thinking about a form that allows people to swap words in and out of your construct – to subvert it. And if you feel that you need to use an image to support or add to your poem, feel free. The challenge will be judged by Rishi Dastidar.

This challenge is for writers aged up to 25 based anywhere in the world. The deadline is midnight, Sunday 10 March 2019. You can send a poem written down, or a recording as a video or as an audio file. You can send as many poems as you like. We welcome submissions in English and in British Sign Language (BSL).

Send your poems to educationadmin@poetrysociety.org.uk with your name, date of birth/age, gender, and the county (or, if you’re not from the UK, the country) you live in and the subject line ‘Meme challenge’. If you are aged 12 or younger on 10 March 2019, you will need to ask a parent/guardian to complete this permission form; otherwise, unfortunately we cannot consider your entry. This is due to new data protection laws.

If you require this information in an alternative format (such as Easy Read, Braille, Large Print or screenreader friendly formats), or need any assistance with your application, please contact us at  educationadmin@poetrysociety.org.uk.

Rishi Dastidar’s poetry has been published by Financial Times, New Scientist and the BBC amongst many others. His debut collection Ticker-tape is published by Nine Arches Press, and a poem from it was included in The Forward Book of Poetry 2018. A member of Malika’s Poetry Kitchen, he is also chair of the London writer development organisation Spread The Word.

One thought on “Little machines: of memes and poems (a poetry challenge)”