Cass Lee is an 11-year-old climate activist and seasoned performance poet from Bournemouth. Young Poets Network interviews Cass in our fourth Young Poets on Climate Change feature, and he speaks about how he realised that everyone has the power to make other people listen. Why are you a climate activist?

I feel the crisis really urgently: I’m growing up in a world where there are lots of scary news articles and videos saying that something needs to be done to stop climate change, but nobody is doing anything. I think it’s important to listen to young people who are growing up with these kinds of things as we have a different perspective to older people, who might be more jaded.

I also have pets – snakes and geckos – which has made me think about climate change more deeply, because I want them to be around as long as I am.

Could you tell us a little about what you’ve done as a climate activist?

Even though my mum agreed with me about climate change, at first she thought veganism was a fad – she’s French and in her culture, vegetarianism and veganism don’t really exist. But because of me, over the past two years she has had to change the way that she shops, cooks and spends her money. And now the whole family eats the same as me even though they’re not all vegan.

Apart from being vegan, I’ve also been to and performed at Extinction Rebellion fundraisers – I went to a whole day of XR and Green protests in June in Exeter, and I’ve been invited to perform a set for Earth Day.

Why do you turn to poetry to express your feelings about climate change?

I’m much better at writing my thoughts out than just speaking them. If I were to talk about climate change without any structure, I probably wouldn’t get very far. But if my thoughts are in a poem I can go further. The structure of having to write a poem can free you up to say things you didn’t know how to say.

Do you think being a poet has made you a better activist?

Yes! If I wasn’t a poet I wouldn’t be as active in activism.

Poetry helped me gain the confidence to speak out against climate change. I’m autistic, and when I was younger, I barely spoke at all. But my mum is a spoken word poet and I used to go with her to her events. At first I would write poems and my brother would read them out. I slowly gained in confidence and started to perform my poems myself. Now I’m an active part of the local poetry scene. That confidence also meant I could become an activist.

What kind of an impact do you hope to have with your poems?

I write about things that I want people to understand more about, for example how it feels to have autism. I want to spread the word about issues like climate change and encourage people to act. Even if one person really listens to my poetry and passes the message on, that’s great.

I know you like to perform your poems. What kind of reaction do you usually get for your poems?

Pretty positive! People are often surprised to hear something so mature from someone so young. Sometimes people take in the facts more when they are said by a child. Sometimes I invite my friends to my gigs and they get inspired to write their own poetry.

Is your school supportive of your writing and your activism?

My school are very supportive of my writing, but not what I’m writing about. They have recognised me as the best writer in the year group, and even asked me to go and help teach writing to Year 6 (which is one year below me). The head teacher is really into poetry and always asks me to show my poems.

But when my mum and I asked for me to take time off school to strike, they said, “This will be recorded as unauthorised absence. School is important.”

I replied, “I think climate change is more important than school.”

I also get challenged about being vegan at school. They don’t cater for me – I always have to bring my own food. That’s what my poem ‘Can You Eat This’ is about.

The fact my school doesn’t support the content of my poetry makes me want to write more about climate change, because it shows they need to hear about it.

Start small, with something that’s happening locally or maybe something personal. Then you can go on to write about bigger issues. For example, I got sick of people asking questions about me being vegan so I started writing about it. You can focus on how the issue affects you.

Alternatively, it’s okay to start with a rant! But if you try and force your opinion on someone, you won’t change their mind. When you’re editing you can make it more personal. Now that I’m writing about bigger issues I take time – sometimes weeks – researching, thinking about the issue, writing the poem and editing it. Remember that people can change their minds based on a poem.

Pay attention to what’s happening around you. When I write I’m often reacting to an event, an injustice, or something someone has said. For example, after I attended an Extinction Rebellion talk, I wrote a poem called ‘Make Me Cry’, which I then performed at the Earth Strike on 20 September (you can watch it below).

When you are editing, keep reading your poem out loud. See if it makes sense. Read it to other people and ask for feedback. You might need an unbiased view to make the final changes.

Do you feel hopeful or hopeless about the future of the planet?

I feel a mixture of hopeful and hopeless – which is why I think it’s not about hope, it’s about what we’re doing now.

Lots of people just want to live in the moment and have fun – they don’t care, and they don’t feel hopeful or hopeless. That’s why people like us just have to act.

What final words would you say to young poets thinking about getting involved with climate change?

You have the power to make other people listen, including your parents. My best friend’s mum used to not cook vegan food even when I came round, and tried to get me to eat spaghetti Bolognese. But over time my friend convinced her mum to cook food that I could eat. And last time I went round, her mum made vegan food.

Keep going with what you’re doing. Keep believing that you can change something. If more people believe they can make a change, more things will change. 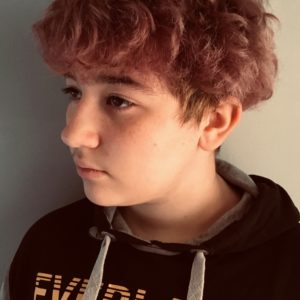 Cass is a 13 year old spoken word poet, writer and artist based in Bournemouth, UK. They started writing and regularly performing their poetry at The Platform open mic from the age of 6. Cass has performed as a guest poet at many festivals including: Badbury Rings Rewind Festival, Field of Dreams Festival, Spoken Extravaganza, Grooves on the Green, Boscombe Community Fair and The Bournemouth Fringe Festival. They reached the semi-finals of the Purbeck Folk Festival Poetry Slam twice and the finals 2 years ago. Cass entered several adult poetry slams and was runner-up at Badbury Rewind and Wordmakers and was offered paid gigs as a prize, performed at Chaplin’s Cellar Bar monthly for the last 3 years and as far afield as the Poetry Café in London.

Cass has been published in the Freeway Poets magazine and The Poets’ Den pamphlet produced by Jericho Arts. Last year, they were featured on The Poetry Society’s Young Poets Network with their work on Climate Change.

Cass has exhibited their paintings and drawings at the Mad Cucumber and sold their artwork. They were invited to be an artist in residence as part of Summer Live in 2017 and 2018 and produced live art during their slot as well as selling their work and performing poetry on stage in Bournemouth Town Centre. They are currently developing their digital art expertise as part of the Amino network and working on storyboarding with the intent of producing and publishing comic books online.

2 thoughts on “Young Poets on Climate Change: “I like not being dead!””