On 6 November, ten young poets performed at the UN’s Climate Conference (COP26) in Glasgow. As world leaders and diplomats gathered to discuss climate action, the winners of the Poems to Solve the Climate Crisis Challenge made themselves heard. 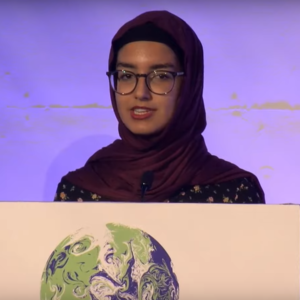 On the long but scenic journey up to Scotland, we took one of the new electric Lumo trains, whose eco-friendly power seemed apt for our destination of COP26. When we arrived in Edinburgh, we took in the sights of the historic city, visiting its imposing castle and admiring the views of the city’s skyline. After having obtained some shortbread and postcards, we finished the evening with a delicious meal at a local Italian restaurant and headed back to the hotel, a little tired but very excited for the day to come.

The next morning, we travelled by train to Glasgow, and battled what felt like torrential weather (some wind and rain) on our way to the exhibition centre. It was amazing to be at COP26, having heard so much about it in the run up to the event, from news articles at home to the banners in the streets in Scotland, and it was amazing to finally perform!

It was so incredible to hear the other young poets’ work – both those who I had met and spent time with on the journey up to COP26, and those who performed via video from across the world. The event was brilliant and went smoothly and, like the whole trip, was impeccably organised by Helen from The Poetry Society. It was a privilege to hear a number of global perspectives on the climate crisis, and to listen to a host of young people all united in a want for change. It was also an immense privilege to have the chance to perform my own work on such a platform, and I feel very lucky to have had the chance to do so.

As young people, we often feel helpless with regards to the crises we see all over the news, and so to get the opportunity to speak out for what we believe in at such a global, crucial event is amazing – we just hope the leaders and decision-makers were listening. 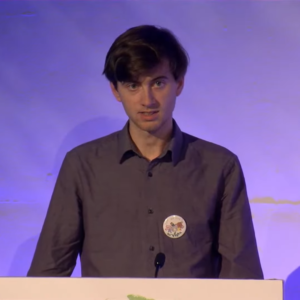 In a climate emergency, why read poetry? Despite my unwavering adoration of words, I was still asking myself this question when I boarded the 10.45 train from London Kings Cross to Edinburgh alongside a group of fellow young poets chosen to perform at COP26.

We were staying in Edinburgh because Glasgow’s hotels had presumably already been snapped up by some of the many leaders and executives arriving from around the world, who together produced more emissions travelling to COP26 than thousands of Glaswegians contribute in an entire year.

The week before the event, I was given the chance to speak to Samira Ahmed on BBC Radio 4’s Front Row about my winning poem in the Young Poets Network Poems to Solve the Climate Crisis Challenge, a wonderful experience but one that had left me wondering how words can ever bring about climate justice. What more needs saying? The world is warming, the seas are rising, weather is becoming more and more extreme. When will words turn into meaningful action, promises into structural change, platitudes into vegan plates?

On Saturday 6 November, we arrived by train in Glasgow, entered the Green Zone – named, perhaps, after all the greenwashing companies housed within – and made our way to the Tower Base North auditorium. There, we performed poetry. Five young poets performed in person and a further five joined virtually from abroad, speaking our truths and speaking out for the environment.

In the evening, I was given a further chance to perform at DEFRA’s Nature and Land Use Evening, where it became even clearer that the current climate conversation is broken. A youth panel discussed climate action over the hubbub of delegates swapping business cards at the back of the room. My own performance of ‘tesco, 9.51pm’, an anti-meat poem, received warm applause but didn’t seem to deter many people from tucking into the beef canapés.

But listening to the other young poets at the Young Poets Network showcase convinced me that poetry has a part to play in the world’s slow transition to sustainability. Poetry is a conversation, a meaningful exchange of personal and collective views. Unlike political negotiation, poetry doesn’t have to be confrontational: people listen and respond to each other’s words and invite future responses through their own. Maybe that’s what made the poems recited feel so urgent and necessary: after a week of empty words from politicians, it stung when Aliyah Begum said, ‘But you don’t listen, distracted by the / Sound of an engine fading further away’.

COP26 has been described as ‘our last, best hope’ (Alok Sharma), ‘a compromise’ (Antonio Guterres) and ‘Blah, blah, blah’ (Greta Thunberg). COP26 has shown that it’s time to listen to the planet and to young people who care about the planet. For me, the experience was cathartic and unforgettable and I’m incredibly grateful to Young Poets Network and People Need Nature for the opportunity. Amidst all the empty words and broken promises, it is clear there is a place for poetry in a climate emergency. Poems might not solve the climate crisis, but they are a worthwhile contribution to the conversation.

“where were you / when the seas / were warming”: a Young Poets Network Showcase with People Need Nature featured in-person performances from first-prize winner of the Poems to Solve the Climate Crisis Challenge Maggie Wang; commended poets Aliyah Begum, Renée Orleans-Lindsay and Daniel Clark; and local Foyle Young Poet Mags Dixon. International commended poets Jayant Kashyap, Brooke Nind, Sabrina Guo, Irma Kiss Barath and Yvanna Vien Tica shared recorded performances from India, the USA, Canada and the Philippines. In addition, poet Louisa Adjoa-Parker, who had set the Poems to Solve the Climate Crisis Challenge, then worked closely with children at Damers School in Poundbury, Dorset, and a short film of their poetry about the climate crisis was also broadcast. Thank you again to People Need Nature for their generous support in running the challenge and funding this trip. Watch the whole event at COP26 above and here.

Aliyah Begum is an 18 year-old poet and performer, who was Birmingham’s Young Poet Laureate between 2018-2020. She is a commended Foyles Young Poet and her work has been featured on Young Poets Network, in anthologies, and on the radio. She has worked with the RSC and the BBC, and will soon be studying English Language and Literature at the University of Oxford.

Daniel Clark is a writer and linguist. He has worked as a leafletter in Lincolnshire, a labourer in the Basque Country and a bouncer in Cambridge, and is currently studying for a Masters in European Languages and Culture. He won the Spanish category of the 2021 In Another Voice Translation competition and has poems published or forthcoming with Ethel Zine, Spelt Magazine and The Sunlight Press. He loves long walks and Guiseley AFC, and is vegan for the animals.