In 2020, Foyle Young Poet Cia Mangat founded Zindabad, a print and online zine showcasing artists from diasporas across the world. We wanted to know: how did she do it? Why did she do it? And how can you start your own zine, too?

A year ago, I’d just started Uni and I was… disappointed. Since I started writing, I’m very lucky to have been involved in a number of poetry communities and one of the things I’d been looking forward to most about uni was getting to meet other like-minded poets, but the pandemic meant that the workshops and open mics I’d been looking forward to just weren’t happening. Eventually I decided to take things into my own hands. I created a Google Form link and tweeted it out, and anyone who signed up was invited to a free, weekly 40-minute poetry workshop I hosted, using whichever poems I’d read on Twitter or found saved in my camera roll that week.

As much as I enjoyed running these workshops, part of me really craved creating something that lasted a little bit longer than 40 minutes: I wanted to turn these sessions into something tangible, but in a way that was just as chilled out and accessible. Cue Zindabad Zine!

So, what is a zine anyway? Traditionally, a zine (‘zeen’, short for ‘magazine’) is a self-published print pamphlet which can be easily reproduced and distributed, often by photocopying. There’s a huge emphasis on DIY culture and putting stuff together yourself – think of the collaged, slightly messy aesthetic of the riot grrrl punk movement. I feel like that’s one end of the spectrum of what we’d call ‘zines’ now – on the other, we can place much bigger publications like gal-dem, Polyester or Rookie (RIP), which are much more like modern magazines with a large online presence.

I’d like to think that Zindabad exists somewhere between the two: I love print culture so I wanted to make sure my mag existed in physical form, but Zindabad definitely has its roots in the online world. I made a free website using a platform called Carrd, with a simple description of the kind of work I was looking for (submissions are open to anyone who identifies with ‘diaspora’) and a Google Form to submit, before tweeting that link out. Slowly but surely, the algorithm did its thing and my submissions spreadsheet started filling with poems, essays, and art from diaspora creatives around the world. Plenty of online zines ask contributors to submit via email, but I find that Google Forms make things easier: you can make sure you have each contributor’s name, pronouns, submission and extra notes all in one place without having to chase anything up later. 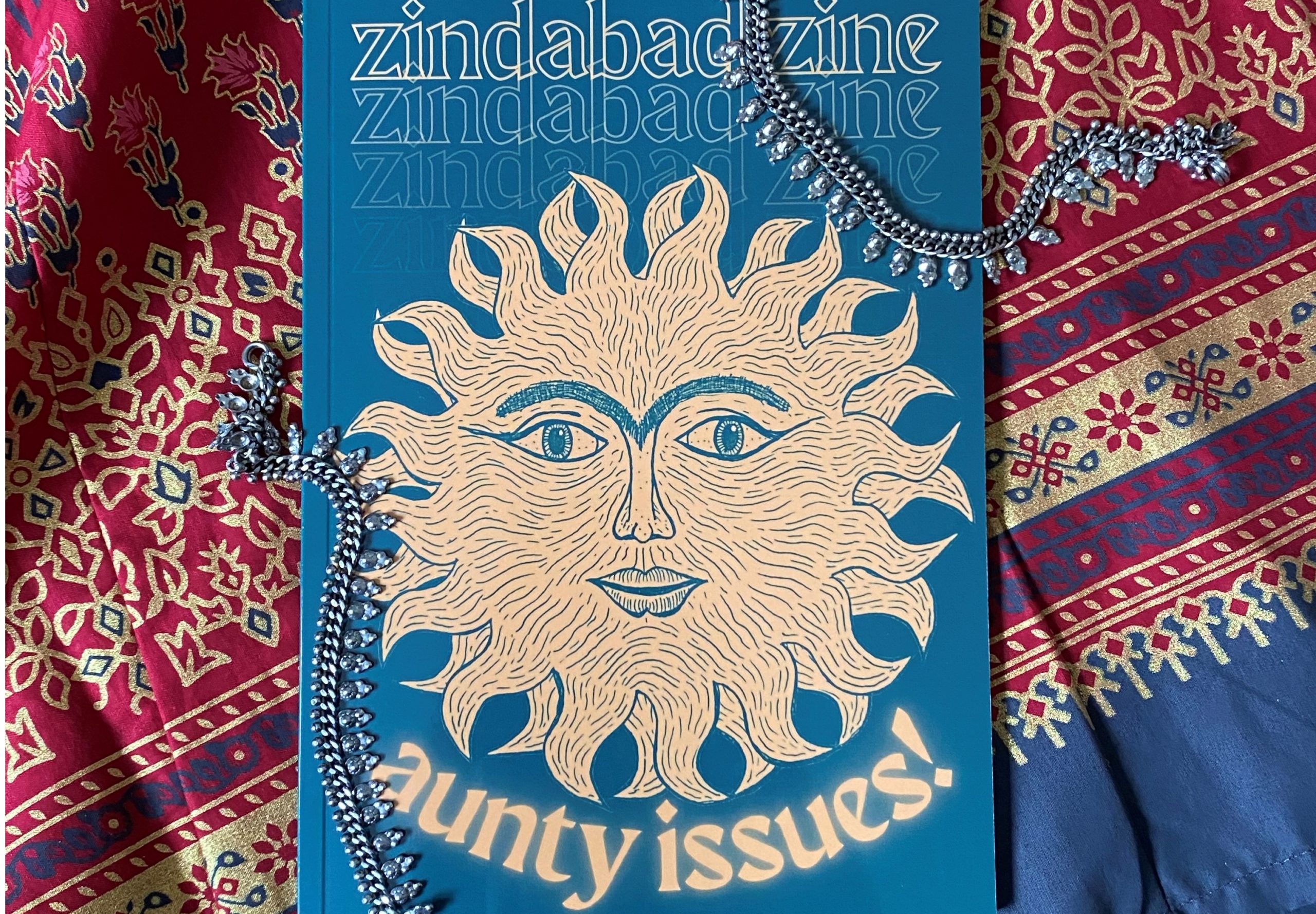 One of the key aspects of editing Zindabad has been… editing. When I accept a submission for an upcoming issue, I’ll email the contributor to let them know and then we’ll start working on making small changes over Google Docs. To me, editing is the process of making something shinier: when I send these edits over it shouldn’t be like I’m marking up their maths homework in red pen, but more like I’m trying to help them polish something good into something even better, or encourage them to see their work in a new light. Usually that means asking questions like how would you feel about taking out the English translation for these non-English words? or what would happen if we turned this poem into a prose piece? Editing goes both ways, too! I think it should be like a conversation, especially when it comes to visually formatting a written piece – I’ll usually ask my writer if they have particular preferences for how their piece might look, and send draft versions over for their feedback.

Formatting is probably one of the trickier bits of starting a zine, especially if (like me) you’re not naturally very artistic. I started off by using the free version of Canva but gradually upgraded to Pro – if you’re a student you should be able to access a year of Canva for free. Lots of magazines use programs like Adobe InDesign but I chose this because it’s much more intuitive and easy to use. Don’t be afraid to use YouTube tutorials/wikiHow if you’re not sure how to make something work! In the beginning I made myself a mood board filled with screenshots of magazines whose aesthetics I liked for inspiration: if you type ‘zine’ into Issuu, you can find dozens of examples for free. Some of my favourites included The Isis, Sula Collective, Orange Blush Zine and Juice.

There are plenty of ways you can put a zine out there. I really wanted Zindabad to be a tangible object that people could hold in their hands, so I did end up using my student maintenance grant to get the issues printed, using a website called Mixam. They’re quite useful because you can use their calculator to get a quote depending on the page number/copies/quality you want, without having to contact them directly. Lots of zines are completely online, too, using platforms like Wix or WordPress, or even sites like Issuu or Flipsnack which let you replicate the double-page spread format digitally for free – see Eponym, co-edited by Foyle Young Poet Dana Collins. That’s not to say that DIY print zines aren’t relevant anymore! Menaces Zine – edited by Foyle Young Poet Libby Russell – has a similar photocopied, old-school aesthetic to earlier zines.

Accessibility is very important to me, and I wish it was to more of the zine community: I’d recommend creating a plain text version of your zine if you’re doing things digitally, so that people who use screen readers can access your zine, and include alt text on your social media captions. If you have the time, you might also want to consider audio versions for people who might not be comfortable with lots of written text. I did this for Zindabad’s second issue by asking each contributor to record themselves reading their piece on their phone or laptop. Next, I edited each audio file using a free program called Audacity, and uploaded the files to Spotify and Apple Podcasts (again, for free) using Acast.

I hope this article is a useful resource: maybe my favourite bit of zine culture is that literally anyone can start. Did you know that Tavi Gevinson was only fifteen when she founded Rookie Magazine? Starting Zindabad has meant I’ve been able to create a space to showcase the work of people who identify with ‘diaspora’, but it’s done so much than that for me as a person. I’ve learnt plenty about editing and organising a group of people’s work, and I’ve got to meet lots of very cool people at uni and beyond: I can’t lie, it still feels absurd when I introduce myself and people ask ‘oh, are you the girl who runs that zine?’

Find out more about Zindabad.

Cia Mangat studies English at university. She is a Foyle Young Poet and a Barbican Young Poet, and edits Zindabad Zine.