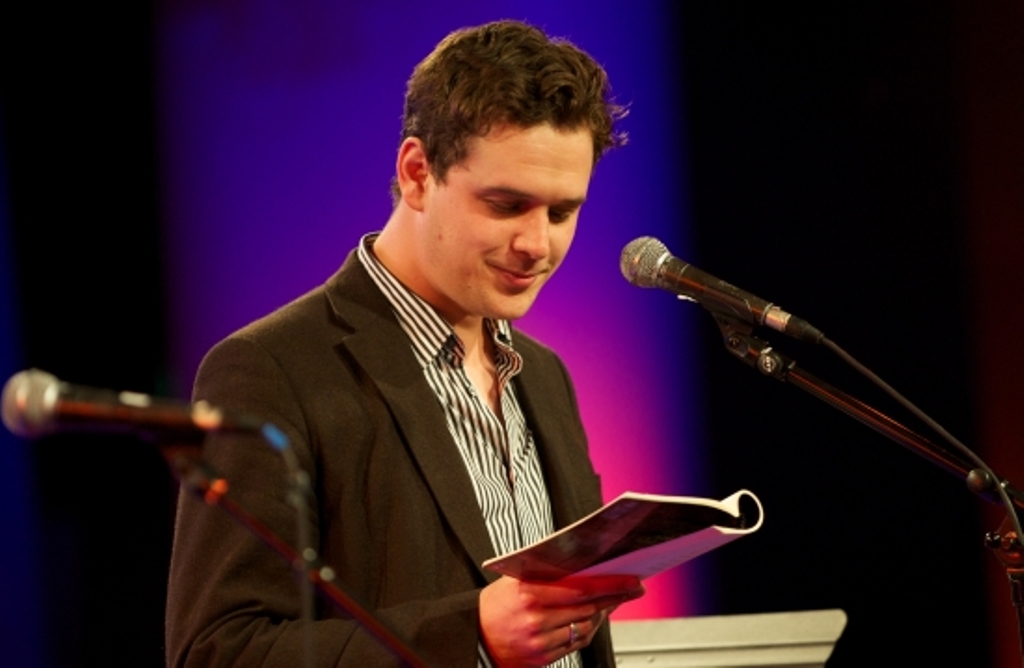 Ever written anything “completely meaningless, hand-gnawingly, howlingly embarrassing”? So did Luke Kennard…

I’ve been looking back over the surviving poems I wrote between the age of 12 and 17 and they’re largely so bad it makes me want to cry. Every time I’ve run a poetry workshop in a school I’ve been struck by how good the students are – how they mostly write with an intuitive straightforwardness that put my efforts, 15 years ago, to shame. I wrote poetry in between 15,000 word science fiction stories as, I guess, a kind of light relief from working out the plot mechanics of time-travel. Take your most self-indulgent, self-piteous diary entry, double it, add a few overblown metaphors, no less than five clichés and put in some arbitrary line-breaks and you have a pretty good idea. At least I wasn’t endstopping. So, at 14:

the inky black void surrounds me.
‘Have you got a light?’ you ask.
I have no light.

Over the next couple of years I can chart my progress from lachrymose junior melancholiac to obscurist renegade poltroon. I was still writing about how I felt a bit unhappy sometimes, but now I was doing it with ridiculously opaque images which didn’t mean anything, even to me, let alone whoever I imagined might read them. I progressed from the existential bedsit miserablism of:

The eyes of these four walls bore into me.

(from the distressingly long ‘These Four Walls’)

(NB: I did not live in a bedsit, but had my own room in a nice semi-detached house with my loving family. I believe I had a Garfield mug hanging on the wall, and a poster of Jennifer Aniston.)

– to the “experimental” bedsit miserablism of:

(by no means the worst couplet from ‘Behind the Pen’.)

Which is completely meaningless, hand-gnawingly, howlingly embarrassing (I am howling as I type this. The “internal” what? How can a gaze “crash”? What the hell was I thinking? Gah!) And I only share it with you as a warning. The thing about bad poetry is that one bad poem is very much like another; it could have been written by anyone with a word processor, an over-developed sense of self-pity and an under-developed awareness of cliché. My excuse, looking back, is simple: I wasn’t reading. I didn’t start engaging with contemporary poetry until I was eighteen and my favourite English teacher started lending me stuff.

That’s what was missing: evidence of reading, of actually liking poetry. I’m not talking about quoting, paraphrasing or using lengthy epigrams. I’m talking about the confidence and directness that only comes from wide reading and engaging with contemporary writing and thinking, ‘That’s what it is! I can do that!’ The alternative is sitting in your room, a one-woman or one-man avant-garde. It’s the road that leads to vanity publishing, alcohol abuse and a sense of entitlement to a readership you’ve never bothered looking for. Luke Kennard was born in Kingston Upon Thames in 1981 and grew up in Luton. He writes and publishes poetry and short stories and has written for the stage, taking numerous productions to the Edinburgh Fringe. He holds a PhD in English from the University of Exeter and lectures in creative writing at the University of Birmingham. He won an Eric Gregory Award in 2005 and his first collection of prose poems The Solex Brothers was published later that year by Stride. His second collection The Harbour Beyond the Movie was published by Salt in 2007 and was shortlisted for the Forward Prize for Best Collection, making him the youngest poet ever to be shortlisted. His new collection, The Migraine Hotel is available now from Salt and was recognised by the Guardian Review as a ‘Treat in Store’.