What is a micropress? How do you publish a poetry book? What kind of work do publishers do? Today we’re hearing from Foyle Young Poet Ian Macartney, who became a micropublisher in the midst of the pandemic. 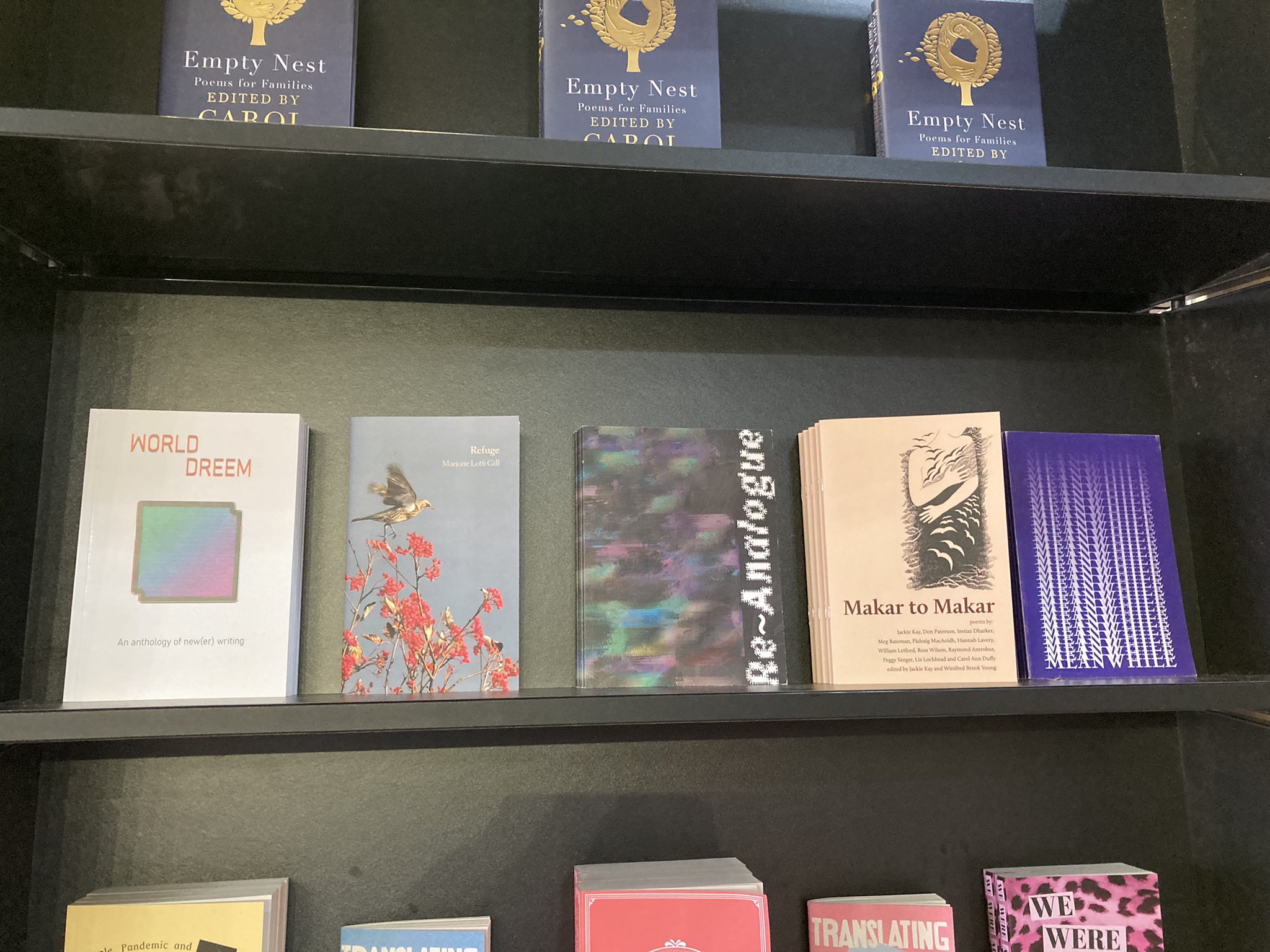 Last summer, at the height of the second lockdown, my friend Tom Byam Shaw and I decided we really wanted to showcase the writing of a lot of our friends. Many of them had not yet been published in print, and we wanted to change that – we wanted to give them the opportunity to be read as widely as possible, beyond their hometowns and cities (Aberdeen, mainly, but also Islamabad, Dublin, Boston, Perth in Western Australia, and more).

The result of this was an anthology called World-dreem, an anthology of short stories and poems from twenty of our favourite young writers. To get this anthology out into the world I set up a “micropress” called sincere corkscrew. In others words, I became an active “micropublisher” – but what exactly does that mean? What is ‘micropublishing’?

We can think of there as being three broad types of publisher. There are the big publishers, sometimes nicknamed the “Big Five”, which you might already know without realising: Penguin Random House, Hachette, Pan Macmillan, Faber and Faber and HarperCollins are everywhere in the book world. Under these names are also many imprints, which are publishers that act independently to the Big Five, but are ultimately connected to one of them. Although they  often produce a lot of good work, at the end of the day big publishers are commercially-minded – they don’t want to just produce good books, they also want to make a profit, and become the biggest business they can. Penguin Random House, for example, recently bought another big publisher, Simon and Schuster, for two billion dollars.

In direct contrast, small presses are independent, and not connected to these big businesses. Unlike the Big Five, which employ hundreds of people, these small presses usually have under twenty people in their teams (there’s even a prize for work published by presses with less than five employees, called the Republic of Consciousness Prize). The work published by small presses is often more leftfield – in 2019, for example, the small press Galley Beggar published Ducks, Newburyport, a 1,000-page novel that is also a single sentence(!). This is the kind of leftfield idea that a bigger publisher would find too risky to publish, but is perfect for small presses keen to push the boundaries of what a book can do. Because of this, a lot of small presses have recently been publishing work that has got a lot of critical acclaim – Ducks, Newburyport went on to win the Goldsmiths Prize for Fiction.

So where does micropublishing fit into all of this? Micropresses are basically publishers that are even smaller than small presses. They are usually run by only one or two people, and have a special focus on limited editions. For example,  Sam Riviere’s If a leaf falls only publishes around thirty to sixty copies of each publication. Small presses, in contrast, are still involved in certain kinds of mass-production – although they are less interested in expanding and making profit like a big corporation would, they still want to sell hundreds or thousands of copies, and be stocked in as many bookshops as possible. Micropublishing, then, leads to the creation of rare publications – it’s less about becoming a bestseller, and more about producing something special; a beautiful object. The less there is of a certain pamphlet, the more meaningful it feels to own. 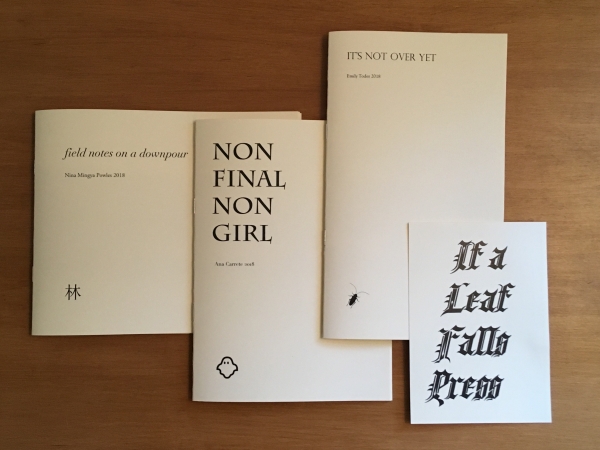 Part of making these special objects also comes about with the care most micropublishers take in making their books. The Edinburgh-based Peanut Press, for example, hand-stitches all of its pamphlets. Which, in a world where so much is mass-produced, really makes the work stand out, because they are not just produced in a factory. There is a personal touch to them, unique to that particular micropress.

In regards to sincere corkscrew, this means that as a micropublisher most elements of the book-making process for World-dreem were down to me. That included:

Soliciting: getting in touch with writers and asking for their work.

Editing: redrafting the work of contributors, when necessary, but also typesetting, or formatting the book so that it prints correctly – making sure that text isn’t wonky, that words don’t spill off the page or over margins, and that lines are evenly spaced. For World-dreem a huge part of this was done by Tom Byam Shaw, but for future projects under sincere corkscrew, I will be entirely responsible for this.

Distribution. Small presses usually use a company to supply their books to bookshops; the biggest one of these in the UK is called Gardners. For World-dreem, however, I got in touch with independent bookshops myself, organising meetings, and delivering copies to be sold in-person too.

So, as a micropublisher, I play all the roles that, in larger presses, would be divvied up to different people. Micropublishers get to be editor, producer, printer and advertiser. The big advantage of this is that I have complete control – decisions bigger presses may think of as risky, or leading to a loss of money, can be taken if I feel it’s the right way forward. One of the big downsides of this, however, is that you can’t allocate jobs to other people; it’s a lot of responsibility for just a few people (or one, in my case).

Even though it is the cheapest of the three types of publisher, micropublishing can also cost quite a bit of money, which a lot of writers don’t necessarily have. This is why funding bodies like Arts Council England or Creative Scotland are useful for both funding and advice, while something like the Poet’s Hardship Fund offers financial support, regardless of whether it is for a project or not (they are also a good example of a micropublisher; they produce the zine Ludd Gang).

Micropublishing is perfect if you want to produce something cheap that will be seen by a small but keen audience – if you have made a zine before, then in a way, you are already a micropublisher! You are publishing a little thing on a small scale – but more importantly, you are producing something personal, with a special kind of value that isn’t defined by just money.

Tom and I went into making World-dreem knowing it would not make us a fortune, or become a bestseller. But although the anthology has had a small impact in terms of numbers, in terms of how we feel about the project, World-dreem has been a huge success. We wanted the work of our friends to be read by many, and now it has, beyond our imaginations. It’s been shipped to ten countries across four continents, as well as being been sold at the Edinburgh International Book Festival and several independent bookshops. If anything, what micropublishing proves is that you don’t have to be a large company to publish something special – if we could do it, then so could you! 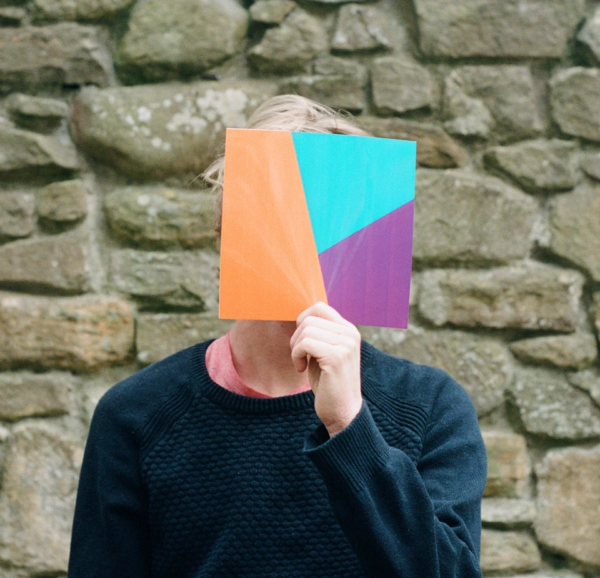 Ian Macartney is a writer. He has been featured in Time and Tide (Arachne Press), The Centenary Collection (Speculative Books), #UntitledThree (Polygon) and Past Present Future (Forest Arts). His pamphlet, ! / Object, is forthcoming from SPAM Press. He can be found at ianmacartney.scot.